Dom asked us to choose our favourite cookbook and randomly select a recipe from it for this month's Random Recipe Challenge.
Picking the books was easy.
My favourite cookbook is Appetite by Nigel Slater.  I spoke about my love for this book in this post. 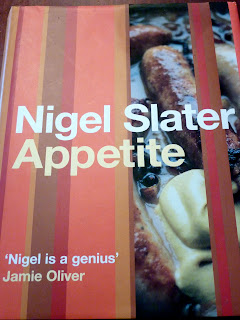 Steve's favourite book is Moro by Sam and Sam Clark. 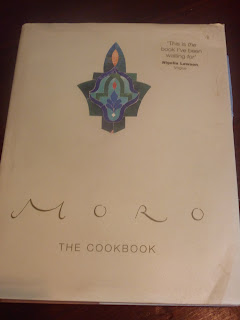 We got the kids to choose our random recipes for us.  My page was number 252 which was grilled vegetables.  One of Nigel Slater's ideas for using them was as part of antipasto.  Steve's page was 36 which was ideas for putting together mezze.  I sense a theme and I imagine Dom is going to accuse us of cheating.  Well I did cheat a little bit - the first page Adam selected for me in Appetite was a lovely looking recipe for lamb shanks but I didn't have time to order them from the butcher and the recipe also uses an entire bottle of rioja so I thought I would keep the recipe for a time when the kids are away and make a special meal for the two of us. Sorry.
We made our meals this weekend.  Steve made mezze for lunch and I made antipasto for tea.
Lunch was wonderful!  Steve chose to make flatbreads, baba ghanoush, falafel and carrot and cumin salad. 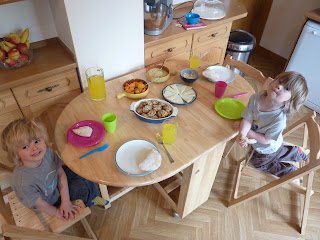 They went together really nicely to give quite a special lunch.  It did take him all morning to put together, though so full marks for effort. 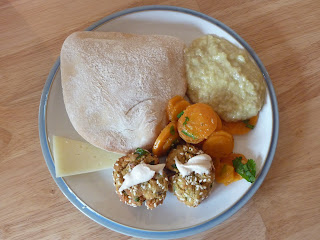 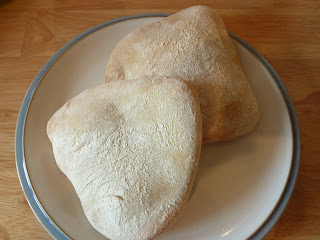 Ingredients -
200g strong white bread flour
1/2 tsp fine sea salt
1/3 level teaspoon dried yeast
170ml tepid water
1 tbsp olive oil
Method -
1. Place the flour and salt in a large mixing bowl.  Dissolve the yeast in the water and then pour the oil into the water.  Now pour the water into the flour a bit at a time while mixing.  We like to do this by hand, squelching out the lumps as they appear.  When all the water is added, transfer to a floured surface and knead well.  If the dough is sticky, add a little more flour; if it is still crumbly add a little more water. Continue kneading for about 5 mins until the dough is ever so slightly tacky but soft, elastic and smooth. Set aside to rest for 45 minutes on the floured surface covered by a cloth.
2. Preheat the oven to 230C/450F/GM 8.
3. Divide the dough into four, and roll into balls.  On a generously floured surface, with a rolling pin gently roll each ball to approximately 3-5mm thick, making sure the shape is a rough circle about 15-20cm in diameter or oval about 15cm in length.  Place on a flat, oiled baking tray and bake in the top of the oven for about 5-10 mins.  Each bread should partially bubble up and colour slightly yet not be totally crisp.

Recipe - Baba Ghanoush from Moro.
Serves 4-6.
I absolutely devoured this - perfect with the flatbread. 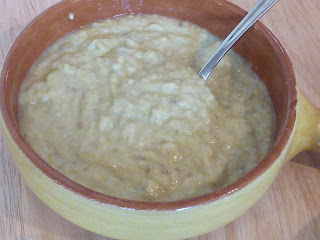 Method -
1. Pierce the skins of the aubergines to prevent them from exploding and grill whole over a hot BBQ, directly on the naked flame of a gas hob, or under the grill until the skin is charred and crispy all over and the flesh is very soft.
2. When cool enough to handle, discard the tops and peel off the skin, scraping the flesh from the back of the skin if necessary.
3. Place the flesh and any juices in a large mixing bowl and either whisk or beat by hand until almost smooth.  Add the garlic, lemon juice, tahini and olive oil, stir in and taste for seasoning.


Recipe - Carrot and Cumin Salad with Coriander.
Serves 4.
Everyone knows how well carrot and cumin go together.  This one was a hit with the kids and was actually very refreshing. 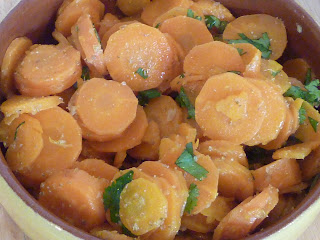 Method -
1. Peel the carrots and boil whole in salted water until they are tender.  Drain the carrots, spreading them out to cool and dry before slicing quite thinly.
2. To roast the cumin seed, place in a small saucepan and stir over a medium heat until you notice the colour beginning to change (about 2 mins).  Pound the cumin in a mortar and pestle, then add the garlic and 1/2 tsp salt and pound some more.
3. Mix the lemon juice, sugar and olive oil into the garlic mixture.  Now toss the carrots in the cumin dressing with the coriander leaves.  Serve at room temperature. 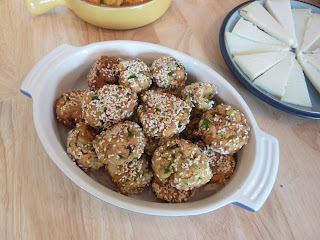 Method -
1. Drain the beans well and place half of them in a large saucepan.  Fill with fresh cold water and bring to the boil.  Reduce to a gentle simmer and cook for 5-10 mins or until tender, skimming off any scum as it builds up.
2. Meanwhile, place the raw beans in a food processor and pulse until more or less smooth.  Transfer to a mixing bowl and repeat the process for the cooked, drained beans.
3. Add the garlic, coriander, parsley, cumin and coriander seeds, onion, flour, egg and bicarbonate of soda.  Mix well and season with salt and black pepper to taste.
4. Shape into balls no larger than a walnut, the gently flatten each one into a disc about 2cm thick, 5cm in diameter, making sure the edges don't crack.  Place the sesame seeds on a plate and dip the falafel until coated all over.
5. Heat the oil in a large saucepan and when the oil is hot but not smoking, add the falafel in batches.  Fry until golden brown on both sides, remove and drain on kitchen paper.

So, then onto my antipasto.  I was to make roasted peppers and roasted aubergine and I decided to serve it with lots of bought things as recommended by Nigel himself - Parma ham, crostini with bought tapenade and some olives (and watermelon because we had some leftover). 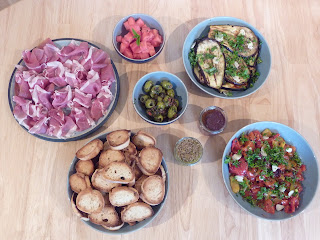 I charred 4 red peppers but the yield from them was pathetic so I sent Steve out to get me a jar of roasted peppers to supplement mine.  So basically, this was a meal bought from the supermarket and the only thing I added was some roasted aubergine.  Well, the aubergine was lovely - but hardly a great effort from me.  Steve was most put out that I hadn't bothered to make my own tapenade and when I thought about it, I realised it really was a poor show!  Steve's comment was, "Are you joining a new group? The Daring Shoppers?"  Hmmm - I guess I deserved that. 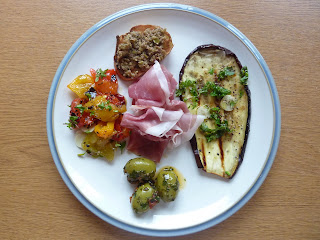 Here is Nigel Slater's very nice recipe for the grilled vegetables.
Recipe - Grilled Vegetables For A Salad, Light Lunch Or Antipasto by Nigel Slater from Appetite. 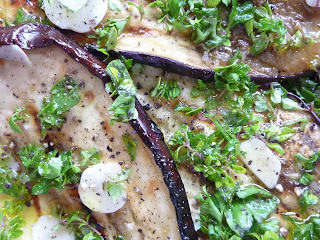 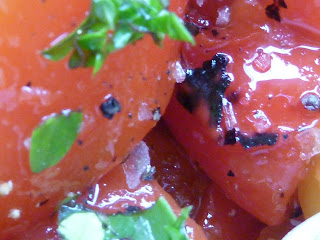 Ingredients -
red peppers - 1 per person (I would say 3 or 4 - or, better still, buy a jar!)
olive oil
aubergines - a large one will be enough for 2 people
herbs - a few soft-leafed ones such as basil and oregano (I used basil, lemon thyme and parsley as that is what is good in my garden just now)
garlic - a clove per person
lemon - half a small one per person
Method -
1. Set the oven to 200C/GM 6.  If the peppers are particularly plump, slice them in half; smaller ones you can cook whole.  Put them in a roasting tin or baking dish, drizzle with a little oil and bake until their skins are blackened and their flesh soft - about 30 to 50 minutes.  Leave then until they are cool enough to handle, then seed and skin.  Save any juices that come out.
2. While the peppers are cooking, put a ridged grill pan over a low to moderate heat and wipe and slice the aubergine.  Aim for slices no thicker than your little finger.  Brush the aubergine with a little oil, grind over a little salt and place them on the grill.  After 3 or 4 minutes they will be starting to brown.  Turn them over and let the other side cook till it is golden, with deep black lines on it from the grill bars.  These are what will give the aubergine a smoky flavour.  Each slice should be crisp on the outside and juicy in the middle - it is essential that they are cooked right through to the centre.
3. Remove the aubergine from the grill and place them in a serving bowl.  Tear up a small handful of herbs.  Scatter them, along with the peeled and thinly sliced garlic, over the aubergine.  Generously crumble some sea salt and grind some black pepper over the vegetables, then drizzle with olive oil, any of the sweet, reddish-brown cooking juices from the peppers and some lemon juice, gently tossing them around with the herbs as you go.  Drizzle the peppers with the same dressing.  Set aside until the vegetables are at room temperature.
So, there you go - a most definite win for Steve.  I won the Nun's Farts, the Praised Chickens was a draw given that we collaborated and Steve magnificently won the battle of the small dishes.
So, 1-1 as we move into the next round.  I am looking forward to finding my fighting spirit again.
Posted by Please Do Not Feed The Animals. at 22:20

Please Do Not Feed The Animals.
Aberdeenshire, United Kingdom
Learning to cook and bake for my family. 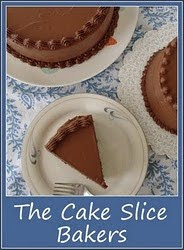 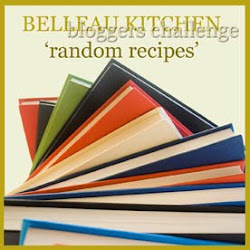